I have been working on porting GLIBC to the OpenRISC architecture. This has taken longer than I expected as with GLIBC upstreaming we must get every test to pass. This was different compared to GDB and GCC which were a bit more lenient.

My first upstreaming attempt was completely tested on the QEMU simulator. I have since added an FPGA LiteX SoC to my test platform options. LiteX runs Linux on the OpenRISC mor1kx softcore and tests are loaded over an SSH session. The SoC eliminates an issue I was seeing on the simulator where under heavy load it appears the MMU starves the kernel from getting any work done.

To get to where I am now this required:

Adding GDB Linux debugging support is great because it allows debugging of multithreaded processes and signal handling; which we are going to need.

Our story starts when I was trying to fix a failing GLIBC NPTL test case. The test case involves C++ exceptions and POSIX threads. The issue is that the catch block of a try/catch block is not being called. Where do we even start?

My plan for approaching test case failures is:

Let’s have a try.

The GLIBC test case is nptl/tst-cancel24.cc. The test starts in the do_test function and it will create a child thread with pthread_create. The child thread executes function tf which waits on a semaphore until the parent thread cancels it. It is expected that the child thread, when cancelled , will call it’s catch block.

The failure is that the catch block is not getting run as evidenced by the except_caught variable not being set to true.

Below is an excerpt from the test showing the tf function.

So the catch block is not being run. Simple, but where do we start to debug that? Let’s move onto the next step.

This one is a bit tricky as it seems C++ try/catch blocks are broken. Here, I am working on GLIBC testing, what does that have to do with C++?

To get a better idea of where the problem is I tried to modify the test to test some simple ideas. First, maybe there is a problem with catching exceptions throws from thread child functions.

No, this works correctly. So try/catch is working.

How does that work? Let’s move onto the next step.

To find this bug we need to understand how C++ exceptions work. Also, we need to know what happens when a thread is cancelled in a multithreaded (pthread) glibc environment.

There are a few contributors pthread cancellation and C++ exceptions which are:

Though DWARF is a debugging format and usually stored in .debug_frame, .debug_info, etc sections, a stripped down version it is used for exception handling.

Each ELF binary that supports unwinding contains the .eh_frame section to provide unwinding information. This can be seen with the readelf program.

The frames dump provides a raw output of the DWARF metadata for each frame. This is not usually as useful as frames-interp, but it shows how the DWARF format is actually a bytecode. The DWARF interpreter needs to execute these operations to understand how to derive the values of registers based current PC.

There is an interesting talk in Exploiting the hard-working DWARF.pdf.

An example of the frames dump:

The frames-interp argument is a bit more clear as it shows the interpreted output of the bytecode. Below we see two types of entries:

An example of the frames-interp dump:

GLIBC provides pthreads which when used with C++ needs to support exception handling. The main place exceptions are used with pthreads is when cancelling threads. When using pthread_cancel a cancel signal is sent to the target thread using tgkill which causes an exception.

This is implemented with the below APIs.

Let’s look at pd->cancel_jmp_buf in more details. The cancel_jmp_buf is setup during pthread_create after clone in start_thread. It uses the setjmp and longjump non local goto mechanism.

Let’s look at some diagrams.

The above diagram shows a pthread that is cancelled. When the thread is created setjmp will create the cancel_jmp_buf. In this case while the thread routine is running it is cancelled, the unwinder runs and at the end it calls unwind_stop which calls longjmp. After the longjmp the thread is returned to start_thread to do cleanup.

A highly redacted version of our start_thread and unwind_stop functions is shown below.

GCC provides the exception handling and unwinding capabilities to the C++ runtime. They are provided in the libgcc_s.so and libstdc++.so.6 libraries.

The libgcc_s.so library implements the IA-64 Itanium Exception Handling ABI. It’s interesting that the now defunct Itanium architecture introduced this ABI which is now the standard for all processor exception handling. There are two main entry points for the unwinder are:

There are also two data structures to be aware of:

These two data structures are very similar. The _Unwind_FrameState is for internal use and closely ties to the DWARF definitions of the frame. The _Unwind_Context struct is more generic and is used as an opaque structure in the public unwind api.

Exceptions that are raised for thread cancellation use a single phase forced unwind. Code execution will not resume, but catch blocks will be run. This is why cancel exceptions must be rethrown.

Forced unwinds use the unwind_stop handler which GLIBC provides as explained in the GLIBC section above.

For exceptions raised programmatically unwinding is very similar to the forced unwind, but there is no stop function and exception unwinding is 2 phase.

As we saw above the personality routine is executed for each stack frame. The function checks if there is a catch block that matches the exception being thrown. If there is a match, it will update the context to prepare it to jump into the catch routine and return _URC_INSTALL_CONTEXT. If there is no catch block matching it returns _URC_CONTINUE_UNWIND.

Unwinding through a Signal Frame

When the GCC unwinder is looping through frames the uw_frame_state_for function will search DWARF information. The DWARF lookup will fail for signal frames and a fallback mechanism is provided for each architecture to handle this. For OpenRISC Linux this is handled by or1k_fallback_frame_state. To understand how this works let’s look into the Linux kernel a bit.

A process must be context switched to kernel by either a system call, timer or other interrupt in order to receive a signal. 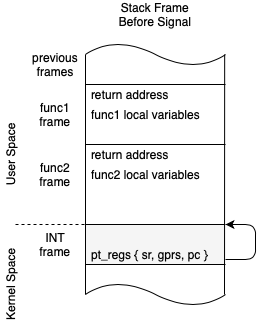 The diagram above shows what a process stack looks like after the kernel takes over. An interrupt frame is push to the top of the stack and the pt_regs structure is filled out containing the processor state before the interrupt. 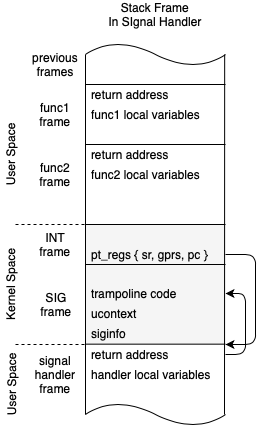 This second diagram shows what happens when a signal handler is invoked. A new special signal frame is pushed onto the stack and when the process is resumed it resumes in the signal handler. In OpenRISC the signal frame is setup by the setup_rt_frame function which is called inside of do_signal which calls handle_signal which calls setup_rt_frame.

After the signal handler routine runs we return to a special bit of code called the Trampoline. The trampoline code lives on the stack and runs sigretrun.

The or1k_fallback_frame_state function checks if the current frame is a signal frame by confirming the return address points to a Trampoline. If it is a trampoline it looks into the kernel saved ucontext and pt_regs find the previous user frame. Unwinding, can then continue as normal.

Now with a good background in how unwinding works we can start to debug our test case. We can recall our hypothesis:

This is the stack trace we see:

In the GDB backtrack we can see it unwinds through, the signal frame, sem_wait all the way to our thread routine tf. It appears everything, is working fine. But we need to remember the backtrace we see above is from GDB’s unwinder not GCC, also it uses the .debug_info DWARF data, not .eh_frame.

To really ensure the GCC unwinder is working as expected we need to debug it walking the stack. Debugging when we unwind a signal frame can be done by placing a breakpoint on or1k_fallback_frame_state.

Debugging this code as well shows it works correctly.

Debugging when the unwinding stops can be done by setting a breakpoint on the unwind_stop function.

When debugging I was able to see that the unwinder failed when looking for the __futex_abstimed_wait_cancelable64 frame. So, this is not an issue with unwinding signal frames.

Debugging showed that the uwinder is working correctly, and it can properly unwind through our signal frames. However, the unwinder is bailing out early before it gets to the tf frame which has the catch block we need to execute.

Hypothesis 2: There is something wrong finding DWARF info for __futex_abstimed_wait_cancelable64.

Looking at libpthread.so with readelf this function was missing completely from the .eh_frame metadata. Now we found something.

An example of gcc -S:

When looking at the glibc build I noticed the .eh_frame data for __futex_abstimed_wait_cancelable64 is missing from futex-internal.o. The one where unwinding is failing we find it was completely mising .cfi directives. Why is GCC not generating .cfi directives for this file?

Looking closer at the build line of these 2 files I see the build of futex-internal.c is missing -fexceptions.

So why is it not enabled? Is this a problem with the GLIBC build?

Looking at GLIBC the nptl/Makefile set’s -fexceptions explicitly for each c file that needs it. For example:

It is missing such a line for futex-internal.c. The following patch and a libpthread rebuild fixes the issue!

I submitted this patch to GLIBC but it turns out it was already fixed upstream a few weeks before. Doh.

I hope the investigation into debugging this C++ exception test case proved interesting. We can learn a lot about the deep internals of our tools when we have to fix bugs in them. Like most illusive bugs, in the end this was a trivial fix but required some key background knowledge.